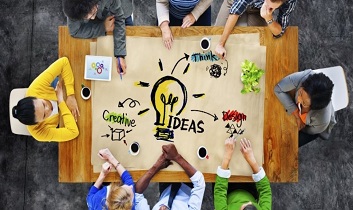 March 1, 2019
Creativity is the act of turning new and imaginative ideas into reality.One of the vital traits of successful people is that they have a creative bent of mind. Nothing could have been ever discovered / invented in this world if not for a creative human being using his/her out of the box thinking and sticking by their convictions.We can think of any name whosoever has been successful,any pioneer in their domain has been, because he/she was not afraid of thinking differently from their peers / times ;sometimes even against the common belief systems & perceptions. Creativity is characterised by the ability to perceive the world in new ways, to find hidden patterns, to make connections between seemingly unrelated phenomena, and to generate solutions.

We have all had those frustrating moments -when we were expected to come up with a brilliant new idea at workplace / in business, but no matter how much we scratch our brains, we just can’t seem to think of anything good.That’s when we look over at our peers who are the “creative types” and wonder why we didn’t inherit any of those creative genes ourselves.But it may be that we’re looking at it wrong.We know that in the current world of professionalism,everybody dreams of being creative but nobody talks or wants to work on the how part of it.Being creative/ideation is actually a skill that can be learned. And, as with any other skill, you can only get better at it with sheer practice.

The first and foremost method to develop creativity is to start thinking of the impossible.Now to think of the impossible,it is imperative to exclude logic and think unconventionally on a different tangent.The perfect example of thinking out of the box were-The Wright Brothers–American aviation pioneers credited with inventing, building & flying the world’s first successful airplane which revolutionized and opened new frontiers for travel,transportation and warfare.This invention was possible only because the human mind had the creative idea of flying like a bird which was historic and path breaking at that time and still is. Their invention became the first powered, heavier-than-air machine to achieve controlled, sustained flight with a pilot aboard which thereby ushered in the Aerial Era.

Hence,I would strongly advise to not to be afraid & think differently on which has never been thought before.This would definitely sow the seeds of creativity which would then with sustained practise- slowly germinate and fructify manifold in our minds making us the problem solvers.