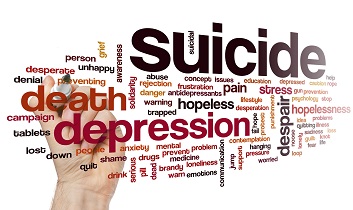 Suicides-Alarming trend among the Youth today…

Suicide is a serious public health problem that affects many young people.Deaths from youth suicide are only part of the problem.Though many suicidal teens appear depressed or downcast, others hide their problems underneath a disguise of excess energy. Girls generally attempt suicide more often than boys, but boys are about 4 times more likely to die from the suicide attempt. This is because the methods that boys choose – often using firearms or hanging – are more lethal than those chosen by girls, namely drug overdoses or cutting themselves.More young people survive suicide attempts than actually die.Suicide among teens and young adults has gone up multi-fold and the risk factors include: family history of suicide; history of depression, other mental health problems, easy access to lethal means; alcohol and drug abuse; exposure to previous suicidal behavior by others; and residential mobility that might lessen opportunities for developing healthy social connections and supports.

With respect to having suicidal tendencies among the youth,I have never been of the opinion that taking one’s life is the solution to any problem.

Now to present my view on the above plot, I would like to mention that we think of running / moving away from only those places where we are sure that we are not loved;we may be in acute emotional / physical pain and may be feeling unwanted / neglected.With my personal experience, I would mention that the outside world is very unpleasant & frightening.The parents who give us birth and rear us,even though our mother may scold us;our father may be a strict disciplinarian and our siblings may fight with us on silly things during our growing up years, but our home is where we belong. Home is our comfort zone and it is the most beautiful place to be on the entire planet.

There are obvious signs that an adolescent may be suicidal which include low self-esteem and self-deprecating remarks. Some teens come right out and talk or write about their suicidal thoughts – this should be taken seriously, and not ignored with the hope that it’s a passing phase. Any previous attempts at suicide are loud and clear cries for help, which demand responses before it’s too late.

Coming back to answer the question as to why suicidal tendencies abound in the youth of today and this I must admit is absolutely tragic and unnerving. I would like to share a real-life incident when one of my acquaintance brought his daughter-an engineering 1st year student to me. After sharing the initial pleasantries, on the insistence of her father;the girl pulled up her sleeves showing me multiple blade inflicted cuts around her right hand wrist. She replied to me in the affirmative that yes,it was she who had inflicted herself with a blade. The girl seemed very adamant, spoke stubbornly and felt no remorse whatsoever over her such actions. I on my part just asked the girl that why could she not find the correct vein in the first few attempts.Then I guided her finger to the exact nerve[green colored] on the wrist that may help her, if cut properly to successfully commit suicide in her next attempt. This reaction of mine surely startled the girl and she gave me a blanked out look as if caught off-guard.I, then said to her that with my experience,it seemed that her problem may be of failed relationships to which she tried to deny vehemently as she was with her parent. Understanding this,I tried to put the point differently that, whatever may have been your circumstances,if you shirk,run away by committing suicide,in your rebirth in another life,you would be presented with the same turn of events from where you had taken the escape route.

To further elaborate on this fact, I would also like to share a small story from Mahabharata where Arjun puts up a question to Lord Krishna as to “What is the Secret of LIFE ?” To this Lord Krishna replied very appealingly that- “Arjun,if you start writing a letter and go to sleep without completing it,would you on waking up, start writing the letter from the beginning again?” In his reply,Arjun stated in the negative and said that he would start writing the letter from where he had left it incomplete.Then Lord Krishna said that–“our lives,rebirth and afterlife plays out in the same way. Hence,when we try to escape from our current set of circumstances by committing suicide,then we are made to take birth in our after life and start our journey from the very same turn of events which we had tried not to face in our previous life.”

I then asked the girl that say for instance, what would be her reaction if her mobile handset happens to get damaged / crushed under a heavy moving vehicle. She replied that she would pick that instrument,take out the sim and if the sim is found intact,would place that sim in another working mobile and would start using the same.To this reply, I asked her–since the sim and number would remain the same as earlier,then the same calls would keep coming and pestering her,meaning that the situations would remain unchanged.This detailed explanation made the girl realize her multiple blunders and then she vowed never ever to even think of attempting suicide.

To conclude, I would like to mention that committing suicide / running away without facing the situation is cowardly because the same chain of events would come back to haunt us in our afterlife as well.
This LIFE is the most beautiful gift given to us by our CREATOR ,we should live it to the fullest with enthusiasm and courage to bounce back from every failure.