Home / Uncategorized / The Power of a Grateful Heart… 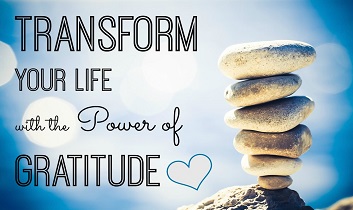 The Power of a Grateful Heart…

We have so much to be grateful for in this life every day. But reality is that, sometimes the struggles and worries give more room to sadness than to a heart full of thanks. Sadness is the human emotion that all people feel at certain times during their lives. Feeling sad is a natural reaction to situations that cause emotional upset or pain. There are varying degrees of sadness. But like other emotions, sadness is temporary and fades with time.

Lord Buddha has aptly mentioned that life is a misery and the reason for all our suffering.He also says that we humans have the tools to alleviate our misery as well.I would like to share a parable/story from Bible which explains the reasons of our sadness and shows how ungrateful we are towards our own blessings.Lord Jesus used to tell this parable to his disciples on a number of occasions as he knew human nature very well that humans need to be continuously reminded of their follies.
The parable is very simple and it tells of a rich businessman who plans to build a big mansion[house] and one day hires few labourers in the morning by 8AM for a wage of a silver coin each. The labourers start digging & working and again the rich man goes out in the market around 11AM to hire more labourers,promising them a silver coin each as well. As the day progresses,the labourers who had started working in the morning see more hands pouring in around 3PM to work and help them in the construction. The rich man hires more labourers by 6PM as well to speed up the ongoing construction activity. Around 8PM when the day ended,the rich man calls all the labourers together to pay them their wage.He starts with the hands whom he had hired around evening 6PM and pays them a silver coin each.He does the same thing with the labourers whom he had hired around afternoon 3PM. Now,the labourers who had been hired and were working since morning 8AM started discussing among themselves that the rich man would definitely pay them more as he was giving a silver coin each even to the ones whom he had hired in the later half of the day.
When the turn of the morning workers came,the rich man paid them too a silver coin each as promised. But the morning workers started grumbling and arguing with the labourers who had been hired in the second half of the day & late evening.They felt that since they had put in more labour & hours in that day,they should have been paid more than a silver coin.When this conflict reached the rich man’s ears,he  called them together again & said to all of them that since he was the master of his money and as promised & agreed, he has not paid anyone less / anyone more. Therefore,Jesus concluded that this human mentality of comparing our blessings is what makes us ugly/repulsive from inside. Because we are never grateful for the blessings / possessions we already have,but are more worried & saddened by the possessions of our peers / neighbours. We should always keep in mind that GOD is very benevolent and always gives us more than what we actually deserve.
Hence,I would like to restate that this simple mantra of being grateful for our blessings should be daily nurtured within us.This habit of our’s is what can make a lasting difference. We have a choice, every day, to express our gratitude towards the CREATOR.A heart of gratitude leaves no room for complaining,thereby enabling higher levels of optimism and life satisfaction.It opens up the door for continued blessings.
This trait of being forever grateful will enhance our intrinsic beauty manifold and we would be able to create wonders with the boon called LIFE.